Once you have finished boiling your wort, it is best to reduce the temperature as quickly as possible below 25C to allow you to pitch the yeast.  This reduces the chances of any nasty airborne bacteria becoming established in the nice sugary wort solution before your actual ale yeast has got to work.  It is also known as the ‘Cold Break’ and helps to precipitate some extra protein resulting in a clearer beer.

There are several common methods used in home brewing to cool the wort:

The benefit of the counterflow chiller is that the wort is cooled completely by the time it has run through the coil and therefore this offers the fastest way of reducing the wort temperature.

The idea for a home made version is to have a tube within a tube.  The hot wort is passed through the inner tube and cold water is passed through the outer tube (surrounding the inner tube) in the opposite direction.  The internal tube must be made from a heat conducting material and is therefore usually small bore copper pipe as often used in central heating systems.  The outer tube is often a length of garden hose as this is cheap and flexible.  Commercial versions have closely spaced plates between which the wort is passed but these are quite expensive to buy hence the reason for making one. 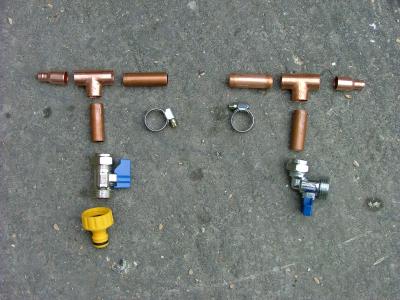 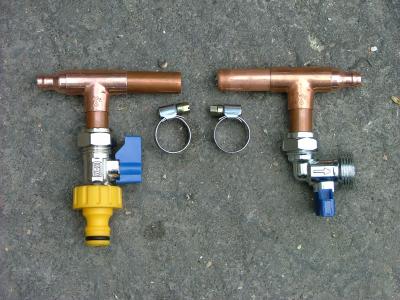 I terminated the cold water connections with washing machine/dish washer taps as this makes it easy to fit standard quick connect garden hose attachments.  The assembly involved carefully straightening the copper tube and pushing through the centre of the hose pipe.  The copper fittings were then threaded over the 8mm tube.  Before soldering, it is important that the hose is coiled (by wrapping around a plastic container) into the final shape because the inner pipe becomes shorter during the coiling process.  Once coiled, the copper fittings can be soldered in place to the inner 8mm pipe and then the hose can be pushed over the 15mm stub ends and secured with the jubilee clips. 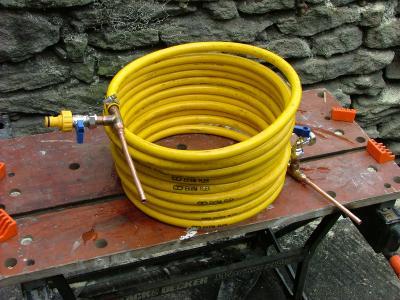